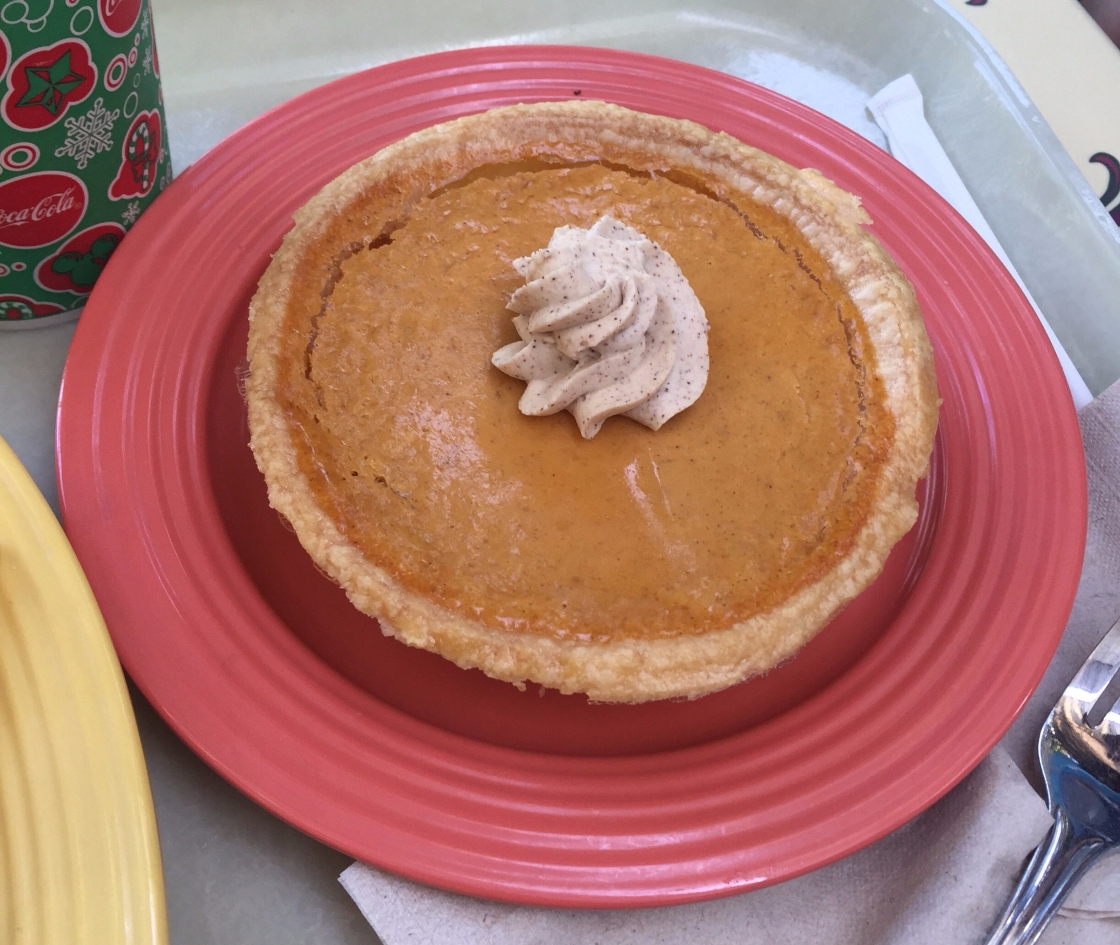 We gave ourselves two days after our mega feast at the Disneyland Hotel to eat a big meal after Thanksgiving. It really did take us that long to get over how stuffed we were. On the day before our departure we decided to sample some of the treats at the French Market before they disappeared to make way for the winter holiday menu.

The park eateries are always great when it comes to seasonal food. If you can’t make it to the resort hotels and Signature Dining restaurants you can still find quality food that makes your holiday a little cheerier. Some of our favorite places for holiday treats include the Plaza Inn (great for a festive dinner), Schmoozies (go there for the terrific seasonal doughnuts), and the Paradise Garden Grill (the Dia de Los Muertos menu was a big hit this year). French Market is another top spot although it tends to be pretty crowded year round. We jumped in line for an early lunch and got some end-of-vacation Thanksgiving grub.

First up was the French Dip sandwich. While it wasn’t Phillipe’s (head to Downtown LA for some classic sandwiches), it was pretty good. The meat was tender, if a little dry. Because the restaurant is usually pretty busy you’ll need to work hard to snag a Cast Member’s attention if you want a wet sandwich. The dryness worked in a way since it held up well to the dips. You’ll get the traditional au jus dip, but also a remoulade similar to the tasty dip you get with your fries at Cafe Orleans. These were both delicious, but I’m more of a traditionalist so I stuck with the au jus. There’s also some fried onions on the side to crunch up your sandwich and a side of fresh potato chips. The portions are large so come hungry or bring a container to pack it away. 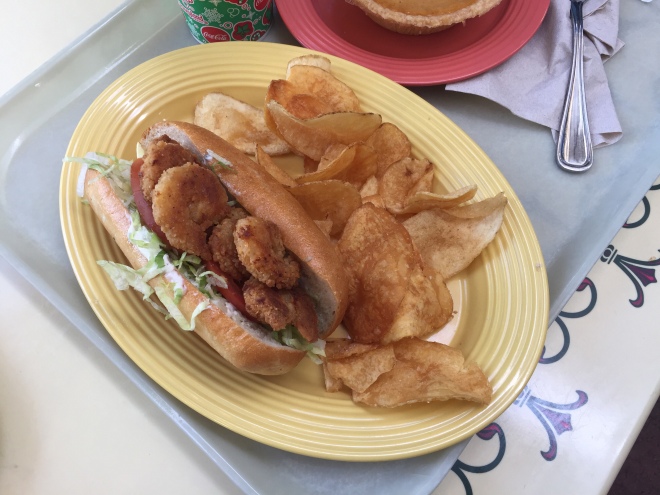 Busy Bumble went for the shrimp po’boy. This is more of a New Orleans classic compared to some menu items, although the French Market’s version will seem pretty plain to any natives of NOLA. The shrimp was wonderfully friend and seasoned. Busy Bumble let me snag one shrimp and I wish they sold these like they sell chicken tenders. The salad was humbly dressed with some shredded lettuce, sliced tomatoes, and more of that wonderful remoulade. Same fresh chips on the side, but we won’t turn those down. Although it seems smaller than the French Dip plate it was still a filling meal.

So where’s the holiday food you ask? We went straight to dessert for the holiday goodies. I tried the praline cheesecake. I make a pretty good pecan praline myself so I was eager to try this mound of creamy sweetness. It is a dense cheesecake that has a strong caramel-brown sugar taste. Does it taste like a praline? Not really. It was good but it was no praline. I would love to see pralines themselves on the menu either at the French Market or the Mint Julep Bar or both locations. I don’t think they’d be too hard to make and would be a hit with guests. This cheesecake was serviceable but it isn’t a fair comparison to say it’s meant to taste like a praline.

We were much happier with the pumpkin pie. This tastes like a traditional homemade pie with a great flaky, buttery crust and a balanced spice to the filling. I actually liked this more than the pumpkin pie tarts we had at the Disneyland Hotel’s Thanksgiving Feast. When I eat pumpkin pie I want it to taste like pumpkin and this was it for me. I appreciated the simplicity of the dessert and the low-level of sweetness (especially compared to the cheesecake).