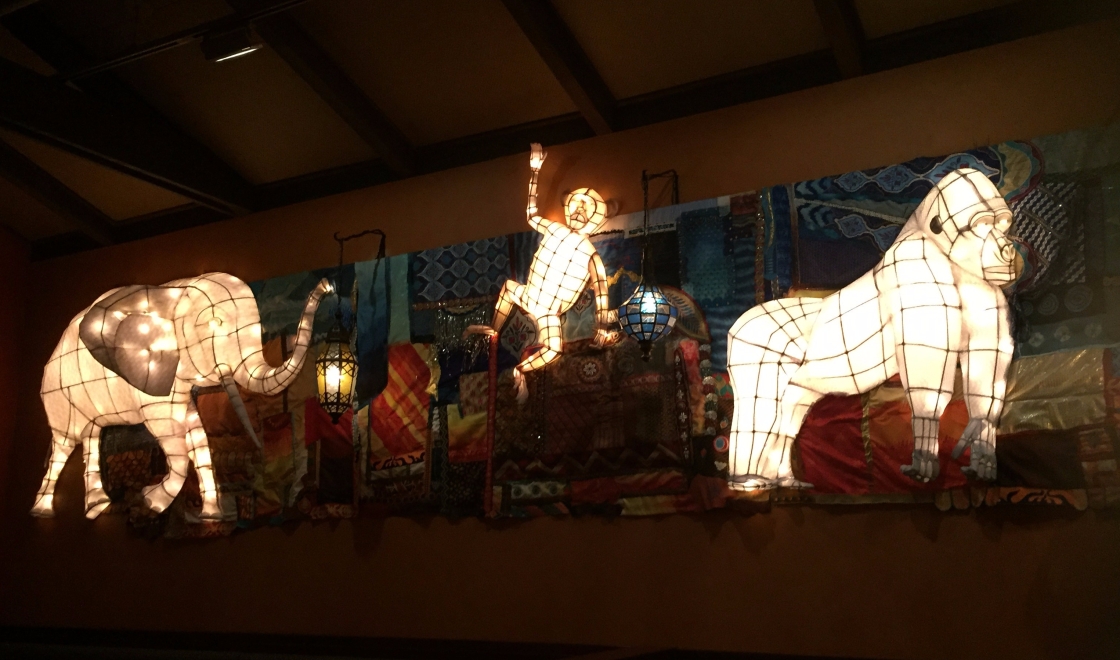 Busy Bumble and I were very lucky to be able to eat at Tiffins on the night they opened last year. This restaurant had been highly anticipated as Animal Kingdom’s first foray into modern fine dining. While you could get a seated meal at Yak & Yeti and Tusker House, Tiffins would be the first Signature Dining option in the park. We were so excited when the reservations opened up and we snatched up the first one we saw. While we had high expectations, we were prepared for disappointments since this would be the first day open to the public. What we experienced was Disney dining at its best and a window into what could hopefully be a new move for theme park dining in the future.

Tiffins is located in the Discovery Island section of the park, right next to the entrance to Pandora. When we went there were construction signs and fences up. Since the restaurant is tucked around the corner from Pizzafari it was hard to notice. Most people didn’t even notice a restaurant was there, so there were no walk-ups when we checked in. This made for a quiet, intimate dinner and a welcome break from the bustle of the park. A year later I imagine this has changed, but I hope not.

The restaurant is named after the stacked tin trays that hold lunches for workers in India. The entire restaurant is built around the influences that went into designing Animal Kingdom. In the lobby there are concept sketches from the travels Imagineers took and other reference items such as photographs and even souvenirs from their travels. The great joy of this restaurant is how it embraces the real world that Imagineers brought back to the park and where the real and imaginary blur here at Animal Kingdom.

There are several dining rooms, each designed around art crafted from Imagineering inspirations. You’re free to take a look around while you’re in the restaurant, and our server encouraged us to take a peek in each room as all the art is one of a kind.

The menu is more eclectic and exotic than the usual park fare. The food  takes its influences from all over the world, with most leaning Asian. Expect bold, new flavors and combinations that you may not have tried before. There are a few “safe” things on the menu for those who aren’t adventurous eaters but there’s nothing too far out of anyone’s comfort zone (don’t worry, there are no bugs on the menu and nothing with eyes to stare back at you).

We started our meal with the red wine flight. At the time this had wines from Argentina, Chile, and Australia. Each definitely had a different taste, although they were made from different varietals so that contributed too. Busy Bumble also had a cocktail: the Annapurna Zing. This had gin, passion fruit, mint, lime, and ginger beer. It was tangy and refreshing, especially after a humid and stormy day in the park.

Everyone’s meal comes with some bread and a delightful pomegranate molasses. The bread was served warm and soft. The pomegranate molasses was actually not all molasses, but more like those balsamic vinegar dipping mixes you see in Italian restaurants: thin enough to drizzle or dip. The flavor was complex: deep molasses flavor, with a hint of umami, and a tart top note from the pomegranate. This was a fun was to begin the meal.

Our starter was one that we still crave: grilled octopus. Served with aioli and olive oil, this was actually one tentacle that had been marinated and grilled. I had expected something chewy, but this was soft and sweet as a scallop. We would come back to Tiffins just to order plates of this for starter, entrée and dessert. This is hands down the best octopus I’ve ever eaten. If you’re scared of trying this mollusk, try it here. You won’t regret it.

For my entrée I had the Wagyu strip loin and short rib. This was served with rainbow carrots, purple potatoes, and chimichurri. The meat was amazing. Sometimes you order these fancy steaks and can’t tell the difference from something you’d buy at a store (why anyone would make a Wagyu or Kobe burger is beyond me. You can’t taste anything different and you’re paying five times the cost!). This was definitely high quality meat: incredible marbling resulting in an amazing texture and flavor. I would not spoil this meat by drowning it in a stew or grinding it into a patty. The strip loin was cooked to a perfect char on the outside while still pink on the inside, and the short rib was so tender and juicy I could have eaten it with a spoon. The chimichurri was fresh and added a piquante note when I dipped my meat in it, but not spicy. The carrots and potatoes rounded things out with just the right amount of starch. If you’ve never had purple potatoes, they taste fairly similar to Russets and other white potatoes but with a thicker starchiness and a fleeting sweetness (not like a yam, but noticeable to some).

Busy Bumble went with the vegetable curry with millet cake and chutney. The vegetables in the curry were chunky and plentiful, making this a filling meal. The veggies are seasonal, so look for the mixture to change depending on what time of year you visit. Busy Bumble had a mix of root vegetables, some aromatics like onion, and maybe some peppers (hard to tell in the curry sauce). The curry itself was on the warmer side; Busy Bumble was happy she could sip from her cocktail to alleviate some of the heat. The millet was like a cross between rice and quinoa, only spherical. Millet is a plant similar to corn, so the starch played well against the heat of the curry. For those who are health nuts millet is a whole grain so it’s better than white rice with the meal and may be even better than brown rice. The chutney was an interesting flavor that we liked on its own but couldn’t quite make work with either the curry or the millet. This might be better for someone who really needed to cut into the flavor of the curry, but since we both liked the curry as it was we didn’t feel the chutney added anything.

Dessert was also exotic: South American chocolate ganache with chocolate sponge, vanilla cream, and fried banana for Busy Bumble and a calamansi mousse with mango filling for me. Busy Bumble had hot tea for dessert, which helped the sweets go down a little easier after so much food. I had some iced tea to help balance out the alcohol.

The chocolate ganache is more like a chocolate tart. It was a thick, velvety bar of dark chocolate with a chocolate tuille cookie dividing into three sections, one for each topping. Some berry sauce on the side was visually striking as well as a tart contrast to the chocolate. Busy Bumble liked the fried banana the best with the chocolate, but all three were amazing.

Busy Bumble and I are half Filipino so I had to try the calamansi mousse. Calamansi is a tiny citrus fruit, about the size of a cherry tomato. It is very tart but is used in many Filipino dishes and in drinks. Our grandparents once had a small tree in their backyard, so this dessert had some nostalgia flavoring it. The mousse was soft but firm, kind of like a cheesecake. The flavor was tart citrus, but not too sour. If you didn’t know this was calamansi you’d think this was lemon-orange flavored. Inside the mousse was a dollop of mango purée that dribbled out as you found it, like with chocolate lava cakes. There were a few more drops of the mango filling on the plate if you needed something sweeter with the mousse. An adorable tiny meringue crowned the mousse and made for a fun textural contrast.

As if we hadn’t already had an amazing meal our server came back with special prints as souvenirs of our visit! We received sketches of a Himalayan monastery that was used as inspiration for Expedition: Everest, one of our favorite attractions. This was a remarkable surprise at the end of our visit and left us with huge smiles. I’m told there are many different prints that they give out so perhaps we’ll get a new one on a future visit.

Overall we were extremely pleased with our dining experience at Tiffins. This might not appeal to everyone, as the menu items are unusual and the atmosphere more subdued that other park eateries, but I think even a family with young children could enjoy themselves here. From the atmosphere, to the art, to the food Tiffins is an experience for the mind and senses, allowing guests to travel far and wide from the safety and comfort of a Disney theme park. You’re encouraged to try new things and learn as you dine. How many places do that for diners?