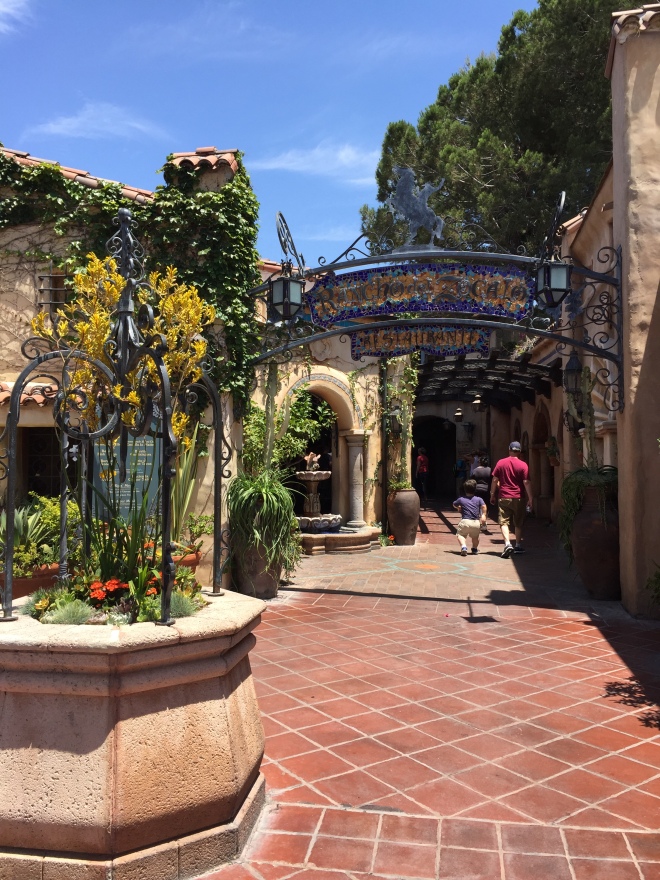 Ever since River Belle Terrace turned into a lunch and dinner table service restaurant guests have been missing breakfast on the west side of the park. Walk a few more paces to Frontierland and you’ll find the current home for west side breakfasts: Rancho Del Zocalo. With tasty Mexican, barbecue, and crowd-pleasing favorites this is a fantastic alternative to Main Street U.S.A. for breakfast.

We decided to go with the theme and order some Mexican specialties to start our day. I went with pork tamales served with rice, beans, and spicy red enchilada sauce. Busy Bumble had one of her all-time favorite breakfasts: chilequiles.

We came at the tail end of breakfast service (breakfast ends at 11am so they can prep for the lunch crowd). The place wasn’t empty but it was refreshingly devoid of people. We even snagged our favorite two-seater table under the covered patio.

My tamales were delicious and incredibly filling. You get two tamales, steamed in the traditional corn husk wrapper. The corn masa was soft and flavorful, while the park filling was full of shredded, savory pork. The enchilada sauce was spicier than I anticipated, but I washed it down with some iced tea. It is presented to you on the side, so I think next time I’ll dip my tamales into it rather than pouring it over the top. Because we were at the end of breakfast service our rice was dry and crisp from sitting in the warming pan, but it along with the refried beans were serviceable.

Busy Bumble’s chilequiles were more like a casserole than the made-to-order kind found at places like Catal in Downtown Disney or the Storyteller’s Cafe in the Grand Californian. Nonetheless it was tasty. Layers of corn tortilla, salsa verde, beans, and cheese made this a stick-to-your stomach breakfast, in a good way. Because Rancho del Zocalo is a quick service restaurant the eggs were a scoop of scrambled eggs over the top. While it wasn’t bad hopefully in the future a fresh fried egg will be served instead.

Because I can’t seem to do breakfast without a sweet and because Disney knows how impulse buying works we ended up with some delicious cinnamon crisps after seeing them at the cashier’s kiosk. These beauties are truly amazing. They taste like the love child of a churro and a fried wonton. These were obviously freshly made and I held back from eating the whole bag at breakfast (which was good since we had them for dessert after dinner, too).

Rancho del Zocalo also sells traditional American breakfasts (eggs, potatoes, and choice of meat) as well as the beloved Mickey pancakes from River Belle Terrace. With a few options to choose from there’s sure to be something for each member of your party without generating complaints. This is a great choice for breakfast since it puts you in prime position to make it to rides like Big Thunder Mountain, Pirates of the Caribbean, Haunted Mansion, and Splash Mountain before many guests get close. Once Galaxy’s End is completed this could also be a jumping off point for those headed to a galaxy far, far away.