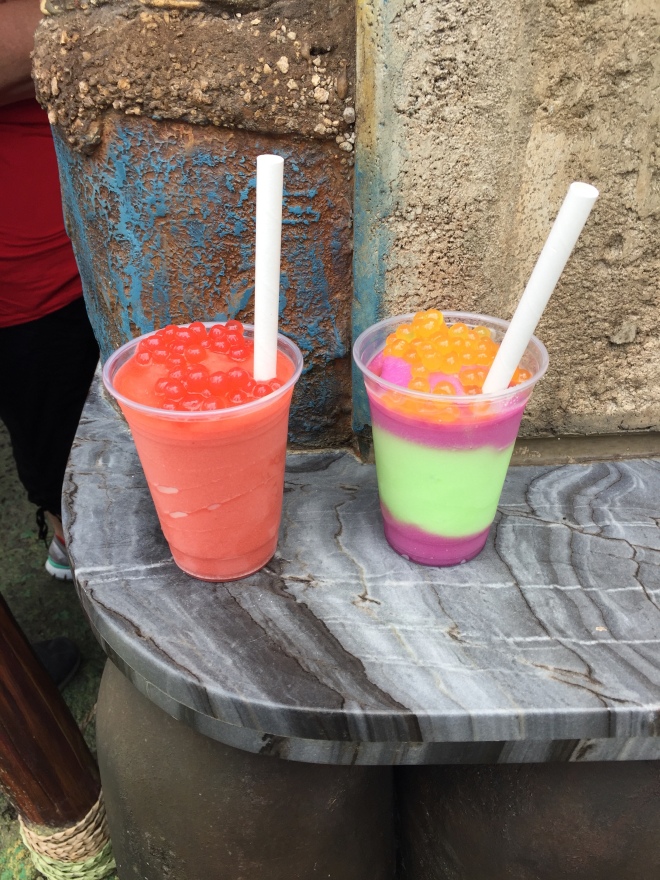 When details about Pandora emerged as the land was ready to open one thing kept popping all over the Internet: food. What would the food be like? Would it just be blue colored churros? Would the food reflect the unique theming of the land? Two eateries have opened and both are unique additions to the Disney food landscape: Satu’li Canteen (a fast casual eatery with protein-veggie-grain bowls as a highlight) and Pongu Pongu (a bar and snack stand). We didn’t try Satu’li Canteen since we had some other big meal plans but I was determined to get to Pongu Pongu. Why? Dessert Lumpia.

As the daughters of a Filipina Busy Bumble and I have grown up with tasty lumpia shanghai and fresh lumpia. For those who aren’t well versed in Filipino cuisine, lumpia is basically eggrolls, savory and filled with meat and veggies. Lumpia shanghai are what most people are familiar with: finger sized, deep-fried rolls filled with a pork and veggie mixture and served with sweet and sour sauce. When I heard that Disney was developing a dessert version I knew I had to be there, if only to report back to my Filipino relatives whether or not it was worth trying.

Pongu Pongu is designed like a repurposed rubbish snack shack for tourists. You can see a lot of human items as well as Pandoran finds thrown together to make the place something like a sci-fi beach shack. There isn’t much on the menu but the line is definitely long. One big reason for that is probably that this is where you can find blended and iced beverages, including alcoholic concoctions for adults. There are non-alcoholic drinks too so you can expect a fair number of families waiting for their drinks.

As I mentioned the menu is pretty small. Usually there’s a board further away from the building with the menu items so you won’t have to worry about not knowing what to order until you get to the window. Much like other snack and quick-service eateries there is an ordering window and a pick-up window. Keep an eye and ear out for your order since many can seem identical.

We decided to go with each of the blended specialty drinks. The Night Blossom was sweet-tart and refreshing. It may seem like it has a lot of flavors competing in the same cup but they blend together well. The popping boba is fun although I’ve met people who aren’t fans. The juice inside is definitely a lot sweeter than the rest of the drink, almost syrupy. I had a few as I sipped but the sweetness was too much in the end, especially when it turned out my little pile of boba was magically larger than it seemed. The Night Blossom is non-alcoholic so kiddies can drink it with no problem. You can’t get it spiked so don’t ask.

The Mo’Ara Margarita is a pretty standard margarita: tequila, strawberries, and blood orange. The flavors are wonderful on a hot day and the tequila-to-juice balance is on point. This was perfect on a hot Florida afternoon and if the line wasn’t so long I would have ordered another. I preferred this over the Night Blossom by a hair, mostly because the Night Blossom was sweeter. Both of them have the popping boba but I think either the alcohol or the filling of the berry boba in the margarita worked better.

Then came the lumpia.

The dessert lumpia at Pongu Pongu consist of a cream cheese pineapple filling wrapped in a thin pastry wrapper and fried. When I first heard of the dessert I tried making it at home with Busy Bumble and our mother. It turned out the way I expected it: a kind of pineapple cheesecake filling stuffing inside a crisp wrapped that was further dunked in cinnamon sugar. It was tasty and I couldn’t wait for Pandora’s version.

The filling was runny and barely tasted like cream cheese with only the slight hint of pineapple! The wrapped was undercooked! Where was the enormous shell of cinnamon sugar that was featured so prominently in promotional pictures? Maybe my hopes were too high and my standards too stringent. I was not happy. I’m always advocating for more Filipino food in mainstream eateries and this is not what I want people to think dessert lumpia should be.

Even before we left friends and family were asking why Disney couldn’t just take another beloved Filipino dessert, banana cue (a banana/plantain dosed with sugar and wrapped in a pastry wrapped only to be caramelized), and sell that. I’m incline to agree with them that banana cue would have been a much better option, but I think the reason they went with the underwhelming cream cheese-pineapple concoction is that it is easier to prepare ahead of time and have ready to fry and sell en masse. I think we were the victims of what falls short when the public demands to be fed. In the effort to get product out into the greedy hands of guests you need to make something quick. Maybe the kitchen was rushed and forgot the sugar. Maybe someone forgot to heat the fryer. In the end I poo-pooed the dessert lumpia and it will take quite a bit of effort on Disney’s part to get me to buy another one.

If you’re thirsty and plan of hanging out in Pandora there are few places better to grab a drink than Pongu Pongu, Just don’t eat the lumpia.