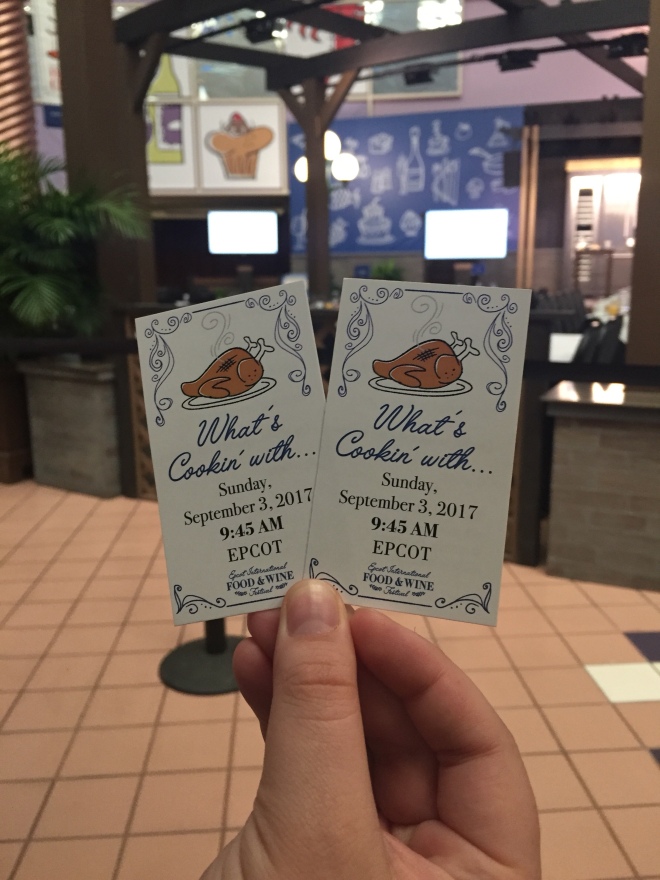 What’s Cooking With…: A Chef’s Table Breakfast at the Epcot International Food and Wine Festival

Behind the Magic, Bites by Busy BeeJanuary 8, 2018

The Epcot International Food and Wine Festival is full of amazing events and experiences that guests can take part in throughout the festival. From tastings to cooking demonstrations to television show appearances, practically every day has something new to experience. The only limitations are seats and/or price.

For the 2017 festival we decided we wanted to try something new and signed up for the What’s Cooking With… Brunch. These brunches are held on select Sundays in the Festival Center and feature a chance to dine with and learn from some of the best chefs in the country. Each week has a different chef, so if you have a chance to pick and choose or go more than once you can find some famous chefs and some local, but renowned chefs. The event includes a multi-course brunch and a cooking demonstration by the chef. The event is a separate hard ticket event you’ll need to reserve seats for. Some of the more famous/popular chefs can sell out quickly, so keep an eye on the schedule and move quickly to get seats for the date you want.

When we signed up we didn’t know our chef, Shaun O’Neale, from anywhere in particular (some foodies we are). Upon hearing the name, though, one of my co-workers recognized him as the winner of season 7 of Master Chef with Gordon Ramsay. He wasn’t a favorite of hers and when we did our research he has been one of the more polarizing contestants, but we did admire that he was not formally trained as a chef and was able to go toe-to-toe with Chef Ramsay without seeming to break a sweat.

The event is held earlier in the morning than the park’s attractions open, so when we arrived we saw Test Track going through the last of their morning test runs and various Cast Members still working on setting up outdoor vending or finishing landscaping. Guests are allowed in early, which affords a great opportunity for pictures without crowds. Because we had the brunch we skipped the photo opportunity and headed straight for the Festival Center. Inside there is a large dining area and stage set aside for these cooking demo-type events. We checked in with the friendly Cast Members and waited for our seating to begin.

Once we got the go ahead to be seated we were assigned a table (Yes! Front and center!) and given a morning glass of Prosecco as a starting libation. I won’t say no to some sweet, refreshing Prosecco first thing in the day!

Our total group was small, which made for an intimate and friendly experience. Out of all the tables (maybe about a dozen, each seating about eight people) our event only used three: two for guests like us and one for Chef O’Neale’s friends and family. We were seated with a group of women who had traveled from Austin, TX and a group of friends who were local Floridians. All of us were huge Disney fans and foodies so we made for an enthusiastic bunch, swapping stories about our favorite theme park eateries and itineraries. 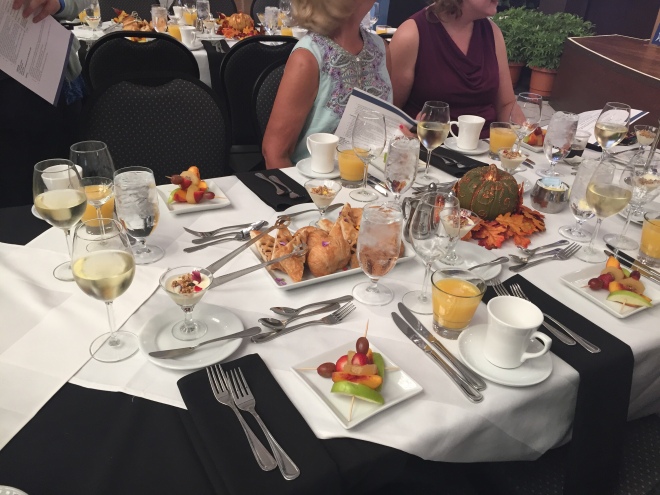 Brunch started off generous with fresh squeezed orange juice, coffee, a huge basket of pastries, fresh fruit salad, and a yogurt parfait. When we reserved and when we checked in we were asked about food allergies and dietary restrictions, so the kitchen behind the scenes was ready to be accommodating. Our pastries were apple strudel and croissants. The parfait was incredibly lovely, with a hearty granola and delicate edible flowers atop a lightly sweet vanilla yogurt. I could have eaten only this and been happy, but we were told this was only the start of our meal!

Our host came out as we were finishing our starters and introduced Chef O’Neale. Of note, he started out as a D.J., working clubs and events around Las Vegas and only cooking as a hobby. He joked that his career has basically been a giant Amazon cart of cookbooks, his purchasing a habit he has yet to break. He never attended cooking school, just read books and experimented at home and on friends and family. When the opportunity to apply for Master Chef came up he was ready to sign a lucrative gig in Vegas and had to make a big decision. He wasn’t a chef, unlike others who could be applying, and he would be turning down a steady job. But he wanted to prove his mettle as a cook and knew he’d regret it if he didn’t try.

Chef O’Neale told us his time on Master Chef was a high intensity, high anxiety experience, and that didn’t even include the antics of Chef Gordon Ramsay. The contestants were all highly motivated, talented people who made competition tough. The process of filming and being away from his family was difficult (long hours, unknown plans, constant stress) but he felt that what he gained from the experience of working alongside a group of worthy competitors and Chef Ramsay made it all worthwhile. When he won he said it was a joy and relief like nothing he’d known. He felt validated as a chef and knew from that point onward he wouldn’t be a D.J. anymore.

Like other winners of reality shows with Gordon Ramsay, Chef O’Neale has cookbooks, makes appearances, and will even have an online cooking class series. He said his goal is to prove that anyone out there can be a fine dining chef; if he could do it, so can we! While music is still important to him he truly enjoys the culinary scene and appreciates the love fans and diners have shown him and his food.

Before we dove into our cooking demonstration we had our entrée: filet mignon in a red wine sauce, eggs Benedict with microgreens, tomatoes, and prosciutto on a fresh English muffin, and a fried potato and leek hash. This was so much more than a breakfast ever could be. I’ve never had filet mignon for breakfast (any maybe never will again) and it was such a decadent and delicious way to start the day. The meat was perfectly medium rare, pairing nicely with the deeply flavorful sauce. The eggs Benedict was everything you hoped for: gently poached egg with a runny yolk that burst when you cut into it, simple spiciness from the microgreens, acidity from the tomatoes, a well-balanced Hollandaise (not too heavy, which I appreciate), and that wonderful salty umami from the prosciutto. Busy Bumble loves the combination of potatoes and leeks and the hash was well-loved by both of us.

Our demonstration dish was squid ink ravioli filled with lobster in a lobster broth reduction with lemon foam, microgreens, and garlic blossoms. Some of the guests were wary when they heard “squid ink.” For my part I love it as well as Chef O’Neale. The flavor isn’t fishy, but is like tasting ocean air, if that makes sense. There is a brininess and marine quality without the expected seafood taste.

Chef O’Neale walked us through each step of the recipe, pointing out where we may have to change things for a home kitchen and where we could buy ingredients. He joked that this was all one big advertisement for Amazon since he found many of his tools and ingredients through the retail giant. He was aided by the amazing backstage kitchen team that brought out supplies and ingredients as necessary. They were real champs and Chef O’Neale was very appreciative as were we all. In the middle of all his cooking the team was also supplying him with his portion of the brunch (imagine having to demo cook and eat your breakfast at the same time!) as well as giving those of us in the audience more wine: the Festival Chardonnay and Festival Cabernet Sauvignon.

During the demo I fell in love with the very high-tech Thermador cooktop they were using, which provided a little comic relief since Chef O’Neale said it contradicted how he and many other cooks use stoves. The cooktop works with specially coordinated pots and pans. When the paired pot/pan is placed on the cooktop it heats up to the programmed temperature (very quickly Chef O’Neale warned us) but leaves the surrounding empty cooktop space room temperature. No burning, no worries about every burner being used and not having one to cook on, it was amazing! Of course Chef O’Neale had a problem when it came to moving a pan “off the burner” and found that just moving it from one part of the cooktop to another didn’t take it off the heat. The heat moved with the pan and he found he had to remove it from the cooktop completely lest he burn our food.

The recipe itself is very easy to follow and we each got a copy of it with detailed instructions and tips from Chef O’Neale. The hardest parts are probably sourcing the squid ink (Amazon) and maybe the lemon foam (requires a delicate touch and a good eye to see when it gets to the point of readiness, then needs to be served immediately before it deflates). When it came to serving us our little taster portions Chef O’Neale commented that the backstage kitchen did an amazing job, especially as our lemon foam did not deflate!

The dish was delicious and great for other who love seafood or even those who are only okay with it. The flavors aren’t overwhelming but are definitely there: lobster and the sea-salty marine-ness of the squid ink. The lemon foam added a welcome brightness and textural surprise to each bite and the microgreens and garlic blossoms added bitterness and earthiness that felt like the metaphorical period punctuation mark at the end of each bite. We’d eaten a lot already but I could have eaten a plate of these ravioli. Chef O’Neale said they were easy to make as either a main entrée or an appetizer, so we will definitely try making these at some point.

The brunch was a wonderful event that I would love to continue to attend in future years. Each weekend brings a new chef with a new recipe and we can’t wait to see who will show up next year. Here’s hoping we’ll enjoy 2018 as much as we did 2017!