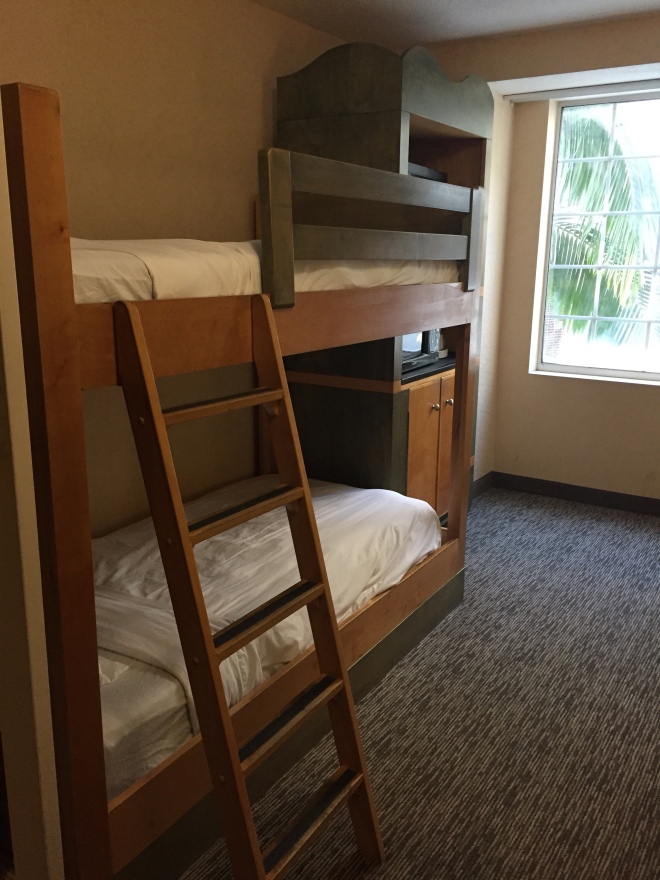 Family Suite at the Portofino Inn

One of the hotel options that is on the rise in Anaheim is the family suite. This typically means a room that can be divided into spaces for adults and for children, although some iterations of the suite include a kitchenette. Hotels such as the Residence Inn are already in a style suited for these suites while others are catching up and remodeling to fit suites into their already existing layouts. The benefit of a suite for a family traveling together is that parents can have their own space while kids can have theirs, free to take up as much room as they need, make noise or snore without disturbing the rest of the group. Suites are more expensive than standard hotel rooms, even two rooms linked together, but there are a few options around the Anaheim Resort.

For a recent stay with family we decided to get a Family Suite, even though it would be a bunch of adults staying together. The reason for this was we could use RCI Timeshare points to exchange at the Portofino Inn. This meant little out-of-pocket expense for a weekend trip.

The Portofino Inn is located on Harbor Boulevard south of the Katella Intersection. It is closer to the Anaheim Convention Center than Disneyland, but you could still walk to the park if in reasonably good health. There is an Anaheim Resort Transit bus stop nearby, so you can also take ART to the park or even to OCTA buses to other Orange County locations. Realistically, as far as going to Disneyland, you can walk to the park easily in the morning, but the evening walk back would be a slog. You may want to consider walking in the morning and taking a bus in the evening back to the hotel. Ask at the front desk which bus to take as routes don’t go to every hotel and can change.

The hotel is in the middle of a bunch of newly constructed hotels that have popped up in the area: the Springhill Suites and Residence Inn are on the back and side of the hotel. As such this is a busy area and parking is an issue. When you check in you are given a parking pass to use if you find parking in the outdoor spots along the lanes within the resort. If you cannot find parking there you can park in the Residence Inn’s parking garage and get your parking validated at no cost at the Portofino’s front desk.

The hotel is a short walk to the Anaheim Convention Center, making it a good alternative to some of the convention hotels such as the Marriott and Hilton. If you’re visiting for D23 in 2019 or any other convention in Anaheim and need a Family Suite, the Portofino and Residence Inns are your closest options.

The hotel is laid out in two parallel buildings. The front desk, Disney tickets desk, and pool are all connected to one building. There is no food served in the hotel, but there is a Pizza Hut in the Residence Inn nearby and many restaurants along Harbor, a few of which have discounts offered to Portofino guests.

The hotel’s design is a little… dated. The common areas a little rough around the edges and even the rooms have the feel of a 1990s-era hotel. That is purely cosmetic in nature, and may be bothersome for guests used to the more recently renovated hotels in Anaheim, but for our purposes it was odd but fine. We weren’t going to be in the room very often anyways. The one area of concern we had were the elevators. We were situated on the second floor and found that both elevators on either side of our building (the one not connected to the front desk and pool) were in need of repair. The doors and lift mechanisms had several obvious problems (opening when the lift had not completely stopped moving, very loud groaning sounds, jerky movement) that made us wary of using the elevators except when we needed to with luggage.

Like I said before, the room is stuck in the 1990s, but it was basically free so who were we to complain. Unfortunately, paying guests may have more of an issue. On a weekday in the slower parts of the year a room can be roughly $215 per night, which puts the Portofino on the same level as the nearby Marriott and Hilton and they’re always updated. My feeling was that the room was best for timeshare owners like us who had exchanged to get there (as an aside, you can get a better value at the Wyndham further south with RCI point exchanges, but there were no rooms available when we tried).

The Family Suite has a main bedroom with a queen size bed, television, and vanity with sink. The bathroom is accessible near the vanity, which is on the side of the room close to the hallway door.

I’m not a fan of where the bathroom is placed in the Family Suite, although this probably was not thought of when they designed the rooms. If kids (or any guests staying in the smaller bedroom) need to use the restroom late at night they need to walk through the main bedroom to get to the bathroom. I feel like a new suite would have the bathroom equally accessible since the point is you don’t want to disturb your temporary roommates. Put the bathroom in the middle so that everyone can sleep or relax peacefully. Again, this probably never crossed the designer’s mind and most hotels don’t put bathrooms in the middle of a suite, but I mention it because it nearly tripped over some shoes in the middle of the night and woke up our “roommates.” I would have woken them up with turning on the lights but I left them off thinking I could let them sleep then nearly broke my ankle.

The smaller bedroom is more of a sitting room with a set of bunk beds. The sofa does pull out into another bed, so you can conceivably sleep six people in the room without asking for a roll away. There is a television in this room and there is a writing desk and chair. The French doors can slide closed for privacy and sound control but they are not sound proof and they do not lock. If anyone is watching television loudly on either side of the doors the other room will hear it clearly.

The bunk beds are sturdy and fairly comfortable. I can state from the experience that the top bunk can hold an adult without structural damage. I did like that the bunks each had their own reading light but after growing used to having a place to charge my phone within easy reach so I can keep it as an alarm clock it was hard to know it was on the other side of the room where I would have to climb down a ladder to shut it off. I found there was an outlet against the wall just at the edge of the mattress on the bottom bunk, which made me consider that it was dangerous for small children who might be in the bottom bunk. It is in a place that is easily reachable, especially for small hands. If you’re a parent staying in this type of room, consider bringing outlet covers to prevent little fingers from the outlets.

As I mentioned I stayed in the bunk bed and found it comfortable if not the best bed I’ve ever slept in. Busy Bumble ended up in the sofa bed because she isn’t used to being in a twin bed anymore and she said the sofa bed was just fine. Our roomies also slept well, barring my near injury in the night.

The bathroom is a typical hotel bathroom for the area. There is a sink and vanity inside the bathroom as well as outside, which means people can primp and brush their teeth even if the bathroom is occupied. The tub shower is pretty standard and we did not experience any issues with cleanliness or water pressure. I did like that the toiletries were not the same I’ve seen offered in at least three nearby hotels.

If it seems that I’m underwhelmed by the place it’s just that I don’t think I could justify paying such a high price out-of-pocket for what you get. For at least $20 per night less you can stay across the street from Disneyland in a newly renovated hotel that might have something like breakfast included. If you’re using timeshare points to exchange, the Wyndham to the south is farther away, but has updated rooms and common areas and a directly shuttle to Disneyland. I also felt like I didn’t want to just hang out in the room or hotel. It wasn’t that the room bothered me in any way, it just didn’t feel like a place I wanted to relax in.

For some this may be a last option for an Anaheim hotel in a busy season. For others they may have had good experiences in the past and they return time and again. I would come back only if I could use points again or if the out-of-pocket price was adjusted lower. I feel like I can get a better value elsewhere in Anaheim, where hotel competition has encouraged independent hotels and chains to raise their game. The Portofino feels like it’s just coasting by.