One of the big announcements of the day came while we were in line to check out the Star Wars theme park expansion model. The Theme Parks and Resorts presentation was going on at the same time and the press was going gangbusters with updates. While in line we saw this: “Star Wars Land Has a Name: Galaxy’s Edge!” What whaddaya know? The exhibit was titled “Star Wars: Galaxy’s Edge!” How’s that for a sly reveal?

The model wasn’t the only thing on display, although it deservedly got the most attention. Imagineers were on hand all over the exhibit to answer questions and give more detail about what guests could expect from the expansion.

There was a real working droid, which we were told would be one of many interacting independently with guests. The most intriguing part of the expansion was the interactive element that made it more than just a place to stand in line and purchase stuff, but more like a role-playing adventure. Guests could interact with everyone from the shopkeepers selling souvenirs to bounty hunters roaming around. 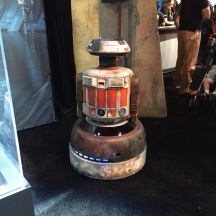 The droid we saw moved independently, seemed somewhat aware of its surroundings (it did not bump into obstacles and even seemed to approach guests inquisitively), and followed a programmed path (it would go out, interact with guests, then return to a mock-up of a “charging station” and plug in for a minute before repeating). It was a delight to interact with I can only imagine what it would be like to have a few of these roaming around Galaxy’s Edge.

Below are some of the displays within the exhibit. Naturally they didn’t have everything available nor were they completely forthcoming about what it all meant, but they were fairly open about their plans and we left feeling excited and eager for what comes next.

The fact that so much of the Star Wars universe will be there for guests to experience and interact with is exciting but also intimidating. Disney has already pushed the opening date back once and I for one am not opposed to them doing so again if they need more time to get it right. Disneyland’s space constrictions post a unique set of challenges that will hopefully not hinder the development of the land’s narrative and unfolding experiences.

The expansion model reflects Disneyland. At the time Imagineers were expecting that a model of the Disney Hollywood Studios expansion would be put on display in Florida. The Disneyland expansion encompasses 14 acres in what was once Big Thunder Ranch and a large swath of backstage areas. Guests will enter from Big Thunder Trail where the red rock hoodoos and pines will blend into the otherworldly landscape of Galaxy’s Edge. In Florida the plan is to take over what was once the Backlot Tour area and transform it into Galaxy’s Edge. The size and attractions will be identical to Disneyland’s version.

There was a lot of take in but we weren’t rushed and were encouraged to ask questions. We left counting down the days until 2019 and promising that the two park tickets we received after the Live Action Film Presentation would go to two very deserving young ladies who love Star Wars…