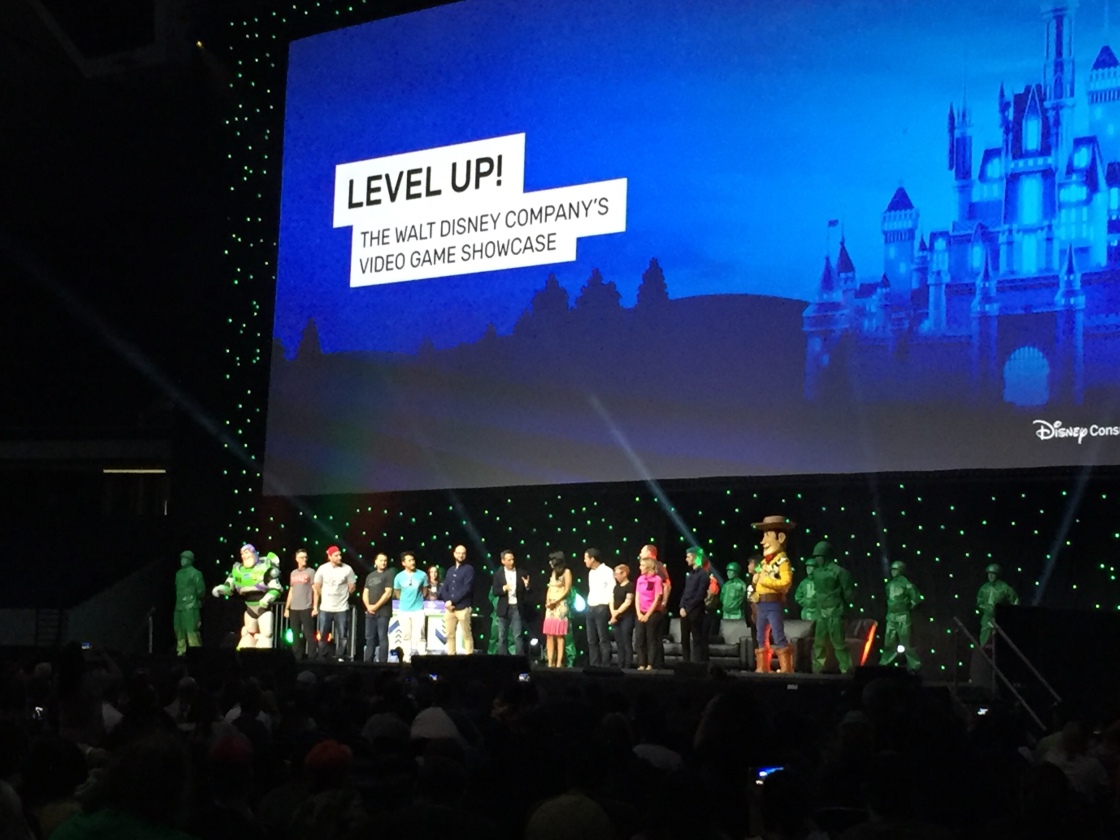 So after the mania that was the Live Action Films presentation Busy Bumble and I were walking on air. What could possibly top that experience? Nothing really, but that wouldn’t stop us from enjoying the rest of the day. After consulting our handy-dandy guides we decided on a session we though we’d miss: Disney Interactive’s upcoming video games. Our biggest hope going in: news about Kingdom Hearts III.

The presentation was in the Arena which was actually packed. Many people underestimate how many gamers there are out there and how strong this group can be. Disney hasn’t. Once the presentation started it was clear they understood at least how influential the culture is: the presentation was streaming live online (unlike every other presentation) and was hosted by some of YouTube’s biggest gaming personalities: Markiplier and jacksepticeye (there was a young woman but Busy Bumble wasn’t familiar with her so her name is lost to the annals of time). Busy Bumble is more familiar with them but from the screaming in the Arena it was obvious that fans thought it a coup that Disney got these folks to emcee the event. I couldn’t help but recall that Disney had signed a deal with YouTube personality PewDiePie a while ago but rescinded their offer when unsavory posts from him popped up online. Would he have been the host had things not fallen apart? In any case fans were pumped to have the hosts who were there. Busy Bumble got a kick out of seeing them in person as she was most familiar with their voices rather than seeing them.

There were a few big announcements in this session. Disney was getting into the VR/AR game with a Star Wars home experience that was met with cautious positivity. VR hasn’t really taken off the way developers would like and it comes down to finding that perfect mix of software and hardware that hasn’t been found. It made me think of the attempt at a Harry Potter spellcasting video game that amounted to toddler pretend play at a very expensive price point. I’m hopeful this won’t be rushed into release without really proving it is a unique and replay-able experience. Gamers can drop $50-70 on a game and it needs to have value beyond an amusing ten minutes.

One of the two biggest announcements involved a favorite franchise. Star Wars: Battlefront II was ready to be released with new content influenced by The Force Awakens and with hints at what may be part of The Last Jedi. A rather well-known Battlefront gamer showed up to tease that he’d played it before everyone else: the Finn himself, John Boyega!

The biggest points: new single player campaigns, new Imperial-side characters and plot, and more expansion content beyond the main story. They trotted out the lead voice-over/motion capture actress to introduce the game’s protagonist: an Imperial special-ops officer during and after the Battle of Endor. The animation certainly looks like her and the gameplay footage they showed was nice, but in the end I’m not a Battlefront player. Where’s Kingdom Hearts?!

Ah, there it is! It’s hard to believe that it’s been 15 years since the first Kingdom Hearts game. While I’ve played computer games since I was a kid, Kingdom Hearts was the game that got me into console gaming. That magic blend of Disney and Final Fantasy was a sugar rush I still get every time I play. I bought the strategy guide before I had a PlayStation 2 just to see how awesome the game could be in print.

With no actual date for Kingdom Hearts III, but assurances that the team was working hard on getting it all together we were treated to a giddy surprise: a preview of a new world! Preview screenshots had already revealed a Main Street Electrical Parade themed world as well as some returning locales, but with a simple shot of some blue and white cloud print wallpaper the next world was obvious: Toy Story!

The fully rendered scenes we were shown featured Sora, Donald, and Goofy as toy versions working alongside Woody, Buzz, and the rest of Andy’s toys. It even featured a mech battle as toys combined for heavier hits! The crowd was ecstatic.

The biggest cheers came when it was revealed a surprise guest had made it all the way from Japan: the master, the legend, Tetsuya Nomura. The creator of not only Kingdom Hearts but some of the greatest Final Fantasy and Squaresoft/Square Enix games ever got a standing ovation from his adoring fans. Despite my sore throat and injured arms I was right there with the crowd, mentally thanking Nomura-san for every Final Fantasy I’ve played (I don’t care what the haters say, I love Final Fantasy VIII!) and loved as well as my beloved Kingdom Hearts.

Nomura-san expressed his gratitude for the fan base Kingdom Hearts has here in the U.S. and his enthusiasm for the next game(s) in the series. He was thrilled to be able to partner not only with the Feature Animation division of Disney but also Pixar Animation Studios with the new Toy Story world. It was sweet to see such a legend geeking out over Disney the same way we were.

All in all the presentation gave gamers a good idea of what to expect and some stuff to look forward to from Disney Interactive. Disney’s video game division has never been a huge contender amongst the other developers but they do have something the others don’t, which is ready access to the entire Disney catalogue of stories and characters. With the acquisition of LucasArts as part of the LucasFilm/ILM deal might I suggest a few of those games be considered for re-exploration?