So Guardians of the Galaxy: Mission Breakout opened this weekend and the Busy Bee and Busy Bumble were there to experience it. For those out of the loop this attraction used to be Twilight Zone Tower of Terror. The change was met with no small amount of controversy and outcry from fans, but in my opinion this new attraction definitely tops it.

Many have complained that putting a Marvel-themed attraction in Hollywood Land is a bad idea. I understand where people are coming with this, but it’s not like the area had a totally cohesive theme anyways. Monsters, Inc.: Mike and Sully to the Rescue? It doesn’t come across to most people as a film set, just a building with the Monsters, Inc. crew. The Animation Building? As much as I love it, it isn’t themed to look like old Hollywood. It’s definitely a different architectural style plunked in the middle of the block. The attraction itself is off to the side and around the corner from the “main drag” so it doesn’t ruin the look of the street and it’s right next door to the back entrance to A Bug’s Land, so let’s talk cohesive theming there sometime. 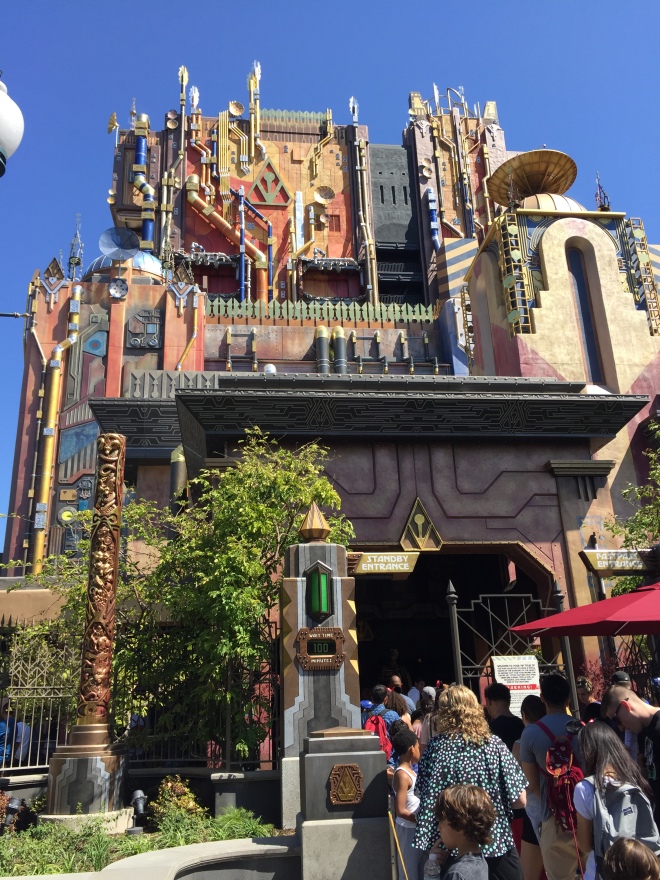 You can see the tower easily from almost everywhere in DCA and outside the park along Harbor and Katella. It really is visually interesting, with a few nods to how it looked like when it was ToT. My worry is how the paint will fare in the hot SoCal sun. I know they repaint every so often, but this will require maintenance to look as good in a year.

Busy Bumble and I were very lucky on opening day to get in line when it was 100 minutes for Standby. That’s amazing for a new ride at Disneyland! I’ve stood in the 3 hour line for Racers when it opened. 100 minutes is nothing. In the end it actually took us less than an hour to get on the ride. I spoke with a few other guests and they had the same experience: the wait time postings need some adjustment. Go in prepared for a long wait but hopefully you’ll be pleasantly surprised.

Conversely, on Day 2 we decided to try for a FastPass in the morning. After checking the DLR app we saw distribution was for the 3pm-4pm hour at 9:30 in the morning. Still there so that’s good. The queue to get a FastPass was pretty epic, though. The end was in front of the Animation building, wound around the corner and then into a special backstage area I’ve never seen used for a queue before. This was akin to the FastPass lines for Frozen: The Musical.

Before you enter there’s the requisite warnings and notices. If you’ve been on ToT the warnings remain the same.

The queue itself winds through the Collector’s private gardens. A massive golden statue of the Collector himself stands at the entrance. There’s also a portrait of the guy in the lobby, so I think he might have some narcissism issues…

Check out the cool lighting fixture at the front entrance, too. There are little touches everywhere that keep this from feeling like a slap-dash overlay over ToT.

You can also find evidence of a break-in:

… and made their way to a ventilation shaft.

A wanted poster for Mantis is a clue that someone on the outside might be helping rescue the team.

The lobby is full of exhibits for you to view prized pieces of the Collector’s hoard (the guy really is just a very organized hoarder…) If you’ve seen all the Marvel films you’ll recognize many of these. 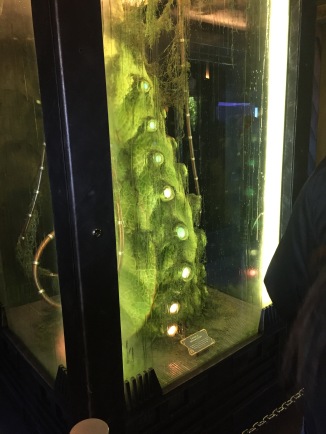 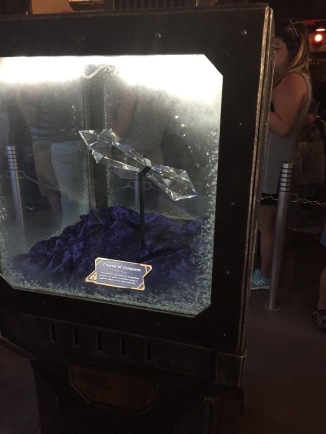 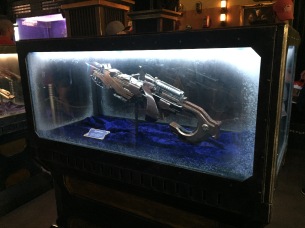 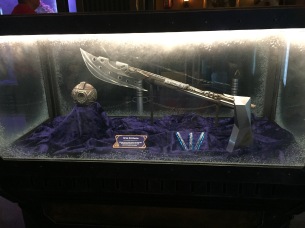 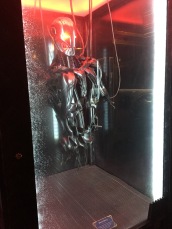 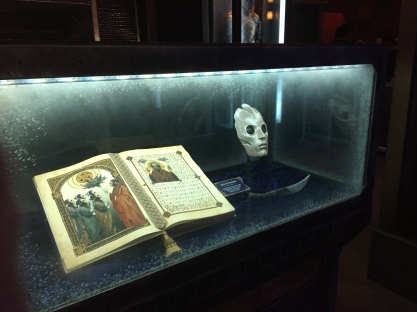 By the way, look who’s still captive of the Collector:

There’s also an amusing film playing as a “greeting” for guests. It’s actually fun to watch and you’ll move fast enough through the lobby that you won’t get bored with it.

You’ll enter a lift to head down to the loading station. For best views stand in the center or back, away from the television screen. Trust me.

Throughout the queue you’ll find a ton of Easter Eggs nodding to Disneyland history, Marvel, and ToT. Check out who we found before boarding!

Obviously I couldn’t take any pictures as we rode. Why is that?

The old ToT was your standard drop ride with a randomized drop sequence that you really couldn’t differentiate since it just felt like rising and dropping continuously. Makes sense since it was supposed to be a cursed hotel elevator. GotG: MB has taken this further. Since Rocket has “reprogrammed” the gantry lift you’re seated on you go up and down with abandon. My college roommate worked on ToT and she said the attraction has the strongest elevator cable in the world (at least it was 12 years ago…) and that the ride used positive control on both up and down portions. So it’s not like you’re just dropped: you’re pulled down. GotG: MB takes full advantage of this incredibly strong cable as it tugs you up and down and up and down until your body almost becomes used to each change. Almost.

The ride does have a computer-driven randomizer, similar to what is used on Star Tours now. This means your drop sequence changes, the visuals you see changes, and even the music that plays changes each time you ride. Granted there are limited variables for each, but this makes repeat riding fun. We got Parliament Funkadelic’s “Give Up the Funk” both times we rode, but the options are:

I love theming. I think it can make or break an entire experience in Disney parks. ToT has a great theme, but the ride itself didn’t do much with it beyond the fact that you were in an elevator. The new Guardians of the Galaxy theme makes the wild ride work. Disney’s Imagineers committed to this theme and took it all the way.

On a background note I understand Disney’s decision to do away with ToT: they were paying millions for the Twilight Zone rights only to have very few guests realize what that was. To get rid of it even for one park is a sign that they don’t need to be held down by the Twilight Zone name. I don’t think the ToT in Hollywood Studios should change, though. I rode that after ToT in DCA and was blown away by it. It is definitely far superior to what DCA had. I think DCA will do just fine with GotG: MB and Florida can have ToT.